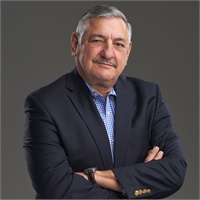 Mr. Buzgon brings over 40 years of experience in the commodities industry to the team at BlueKey Equity Partners. He started his career with Cargill, where over the course of more than a decade he held senior positions as a grain merchant, commodities trader, and on the sales and marketing team.

After a successful tenure at Cargill, Mr. Buzgon moved to Eastern Quality Foods, one of the largest meat, poultry, and seafood wholesale distributors in the United States. Mr. Buzgon has spent nearly three decades with Eastern, rising to the rank of senior vice president and overseeing the company’s marketing and expansion strategy.

Mr. Buzgon is also an active investor in mortgages and real estate, as well as angel and private equity funds with interests across industries including healthcare, education, and technology. He has served on several corporate and community advisory boards as well as on a national food industry board.

Mr. Buzgon is an avid golfer, skier, fisherman, boater, and SCUBA diver. He was born and raised in Philadelphia, and received a bachelor’s of science in economics from Temple University before relocating to Hollywood, Florida in 1990. He lives in Florida with his wife Ellen, with whom he has three children.