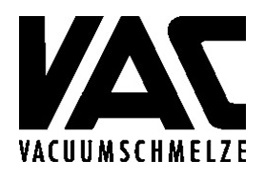 Realized One Equity Partners investments in which Ken Brown was part of the senior leadership in the Deal Team and where he maintained a role on the Boards of Directors Board from inception through divestment.

Founded in 1923 in Hanau, Germany, Vacuumschmelze GmbH & C. KG (VAC) is widely regarded as one of the premier designers, producers and marketers of the world's most technologically advanced magnetic materials and technologies for electronic equipment markets, including the alternative energy, automotive, electric vehicles, electrical installation, and energy conversion and distribution sectors. Among other things, the company has number-one global market positions in its Materials & Parts and Cores & Components units, and a leading global position in its Permanent Magnets unit. The company was once owned by the German industrial giant, Siemens AG, and later by UK engineering company, Morgan Crucible plc.  One Equity Partners (OEP) acquired 100% of the company in 2005.  Working with the VAC management team, OEP facilitated acquisitions and joint ventures in northern Europe, China and Southeast Asia, as well as expansions in Eastern Europe and the United States.  OEP provided steadfast financial support during the recession of 2008-2010, allowing the company to maintain and build a strong customer base, pursue factory renewal and expansion, and make opportunistic entries into new product markets.  As a result, revenues and EBITDA nearly doubled over the period of OEP’s ownership despite the impacts of the economic downturn.  The unique position of VAC’s technology and manufacturing expertise made it an asset that was in high demand worldwide.  VAC was sold in 2011 to Cleveland-based OM Group, Inc., a leading global provider of specialty chemicals, advanced materials, and electrochemical energy storage.